My husband took this picture of a kid sleeping in a store the other day and sent it to me…mostly because he knew that would get me all riled up and ranting about my dislike for toy weapons.
What do you think? Is this horrible or not such a big deal? (and yes, even this bleeding heart can find the humor in this picture as well 😉 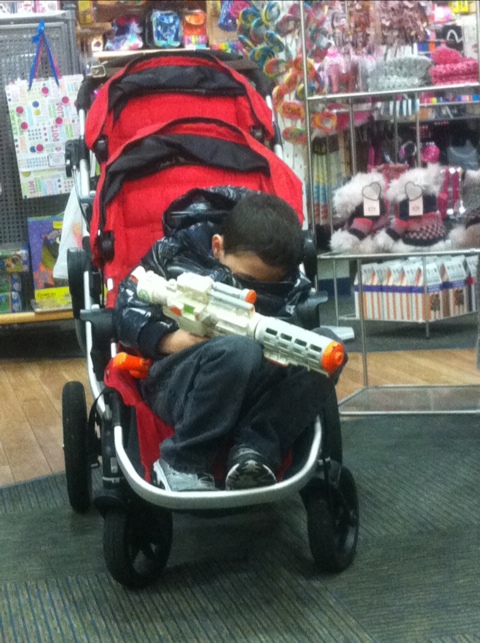 Schlepping around a supermarket pushing a stroller with one hand while balancing an overflowing shopping basket in the other is not an easy job.  Generally, using a shopping cart and a stroller at the same time is impossible (unless the store is near empty, populated only by child-sympathizers, the aisles are huge and you are graceful enough to simultaneously push and pull…)

I have been known to balance a couple of items on my diaper bag…or if I'm dealing with a watermelon or a gallon of water to stick it underneath my stroller–taking care to self-consciously announce to whomever is listening that I am stashing the items there just until checkout.