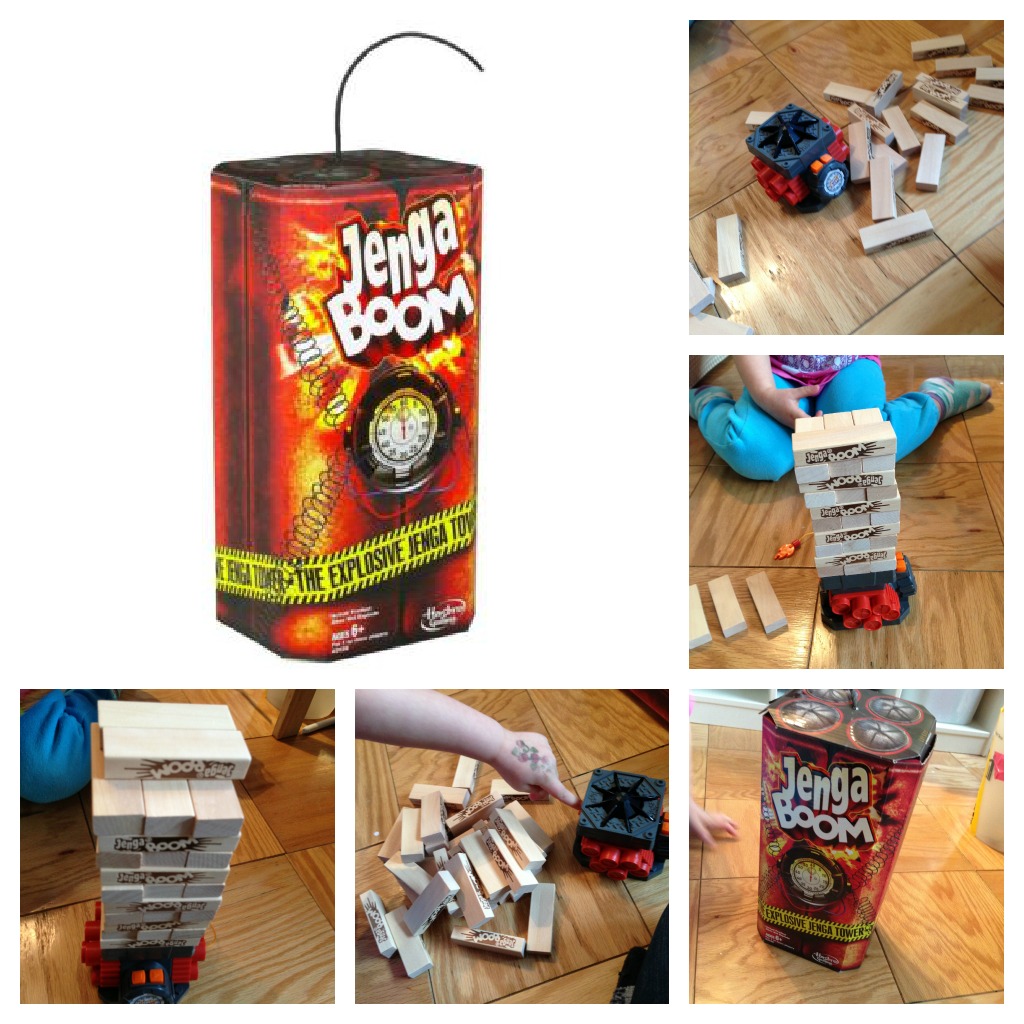 Who doesn’t remember playing Jenga as a kid?  Stacking up the blocks carefully, taking them out one by one and then that ultra-satisfying CRASH when the whole thing topples over.

Jenga Boom takes the crash to a whole new level.

While game play is basically the same, this time the Jenga blocks (mercifully, a smaller stack) are piled up on top of a ‘detonator’.  To begin play, you pull the fuse cord, raise the platform and choose your block to remove and restack while the timer ticks.  You press a button to stop the timer when your turn is over, and then the next player restarts the timer and takes over. If you take too long, the whole thing gets knocked over by the detonator ever before you have the chance to choose the wrong block and ruin it yourself!

I was a little nervous to try this game out with my 3 1/2 year old daughter, because I thought she might freak out when the tower toppled over…but she was game to do whatever her older brother was doing.  I was actually happy to discover that though it is exciting when everything gets tossed over, there is actually very little noise.  I think my kids might even have been a little bit disappointed.

I must admit that now, both my 6 1/2 year old and 3 1/2 year old have decided that it’s more fun to have mommy built the tower and then to just let the whole thing detonate.  Whatever keeps them busy, right? 😉

Win your own Jenga Boom!

Because this game is all about the Boom, I thought it would be fun to have a giveaway that was just as quick.  It’s an experiment, so, like the building of the tower, it might backfire on me.

To enter, go to Hasbro Toys and leave a comment here telling me what other toy on their site you covet most.

RT @peekababy Enter to win the amazing Jenga Boom for your next @hasbrogamenight . http://peekababyny.com/giveaways/post-2224/ Ends 3/1 at 12pm so move fast!

and leave an additional comment telling me that you tweeted.

**Disclaimer: I received a product for review. No other compensation was received.  All opinions are my own.**