I guess we’ve reached that point in the summer when it’s actually time to unearth my ice cream maker from the depths of the kitchen cabinets.

Yup, I actually do have one…it was one of the most exciting things that I got to add to my wedding registry.  For the first few years, I used it a ton…then I broke the bowl and forgot about it for a bit.  At some point in the middle of the winter, I ordered a replacement bowl and told myself that I would be making a ton of ice cream this summer….

I’ve eaten plenty of ice cream, mind you, but I haven’t been able to get my act together to make any. The forethought involved in putting the bowl in the freezer the night before just hasn’t quite worked out.

Now that I have this new recipe to try, I am totally going to make some this week.  Really.

I may even add in some fresh peaches or apricots. 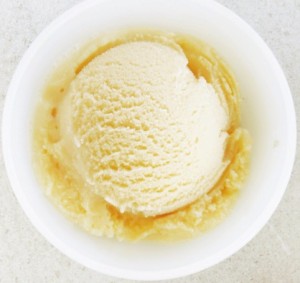 Courtesy of Cooking in Everyday English

“A total classic! Once you learn how to make the base for this ice cream, you can do all kinds of things with it in addition to the variations below. Mix in chocolate chips or fresh fruit at the end of the freezing, or serve it with chopped bananas and chocolate and caramel sauce for a sundae.”—Todd English

2.       Bring chopped vanilla bean and seeds, half-and-half, heavy cream and sugar to a boil in a medium saucepan over medium-high heat. Remove from heat, transfer to a bowl and let stand 30 minutes.

5.       Cook over low heat, stirring constantly, 3 minutes or until mixture coats the back of a spoon. Pour through a fine wire-mesh strainer into a bowl; discard solids.