“Uuuummmmm…..Mommy,  Latkes don’t fly! Why would they do that?”

So started my subway ride downtown with my super-curious, constantly questioning 5 year old. As the train rumbled on, I must’ve heard 17 versions of that question (statement?)…

Well, it turns out that sometimes they do. 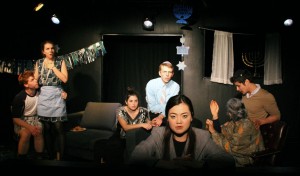 Adapted by Arthur Yorinks from his children’s book,  “The Flying Latke” is the story of a chaotic family celebration of the first night of  Hanukkah.  After a disagreement between cousins, a food fight ensues and a latke (potato pancake traditionally made for the Jewish holiday of Hanukkah) flies out the window  and is mistaken for a UFO, sending the world into a panic and trapping the Silversteins in the house for 8 days with nothing but a never-ending supply of latkes to eat.

The small, bare-bones theater really added to the enjoyment of this show–we were so close to the actors that my son and I felt like we were part of the family fun.  In fact, my kiddo, who was asking clarification questions in a stage whisper throughout the show, actually fell silent at one point because he was convinced that the Silverstein’s Bubbe was raising her eyebrow at him. 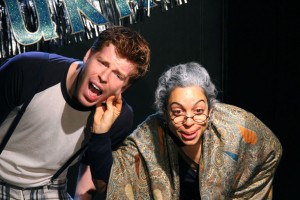 When the Latke comes back to earth on the 8th day and the family bursts into song, it was all I could do to keep my son from jumping off his seat to join in!

This show is funny enough for older children and adults who will appreciate all of the yiddishisms, and the story-line is simple enough for younger ones to follow.  Even better? There is not one scary moment in the entire show, which is good for those of us with fearful youngsters.

The Flying Latke runs through December 18th, so you have two more chances to see the show next Saturday and Sunday at 11am.  Tickets are $12 per person.  For a discount of $2, please use code. BLOG5.

Check the Flea Theater‘s web site for the full performance schedule. The Flea is located at 41 White Street between Church and Broadway.

Disclosure: I received tickets to the show from the lovely ladies at Mamadrama