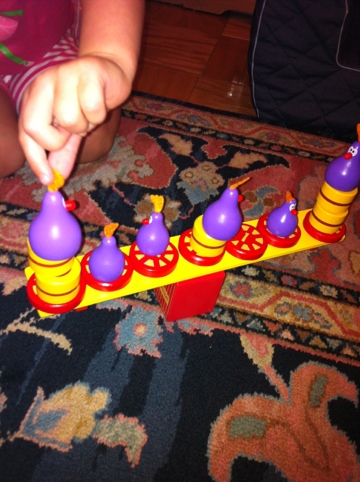 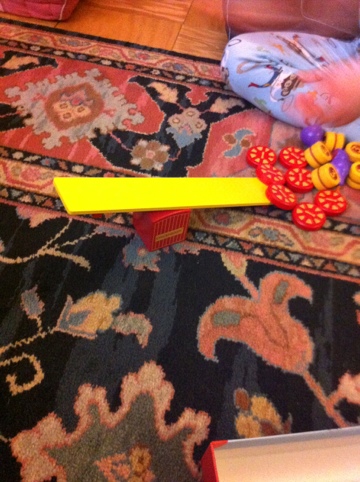 I have one child who has not yet preschool and another who has just finished Kindergarten, and it is no easy feat to find games that they can play well together.

Chickyboom is a simple balancing game–the object of the game is to line up and then remove, the brightly colored wooden chickens, wagon wheels and hay bales, one by one from the platform without tipping everything over and creating a mess.

Before my children would even play the game, they immediately began to create silly stories using the irresistible purple chicken game pieces.  The game pieces are not only super cute, but are constructed solidly out of wood and feel nice in the hand.

When actual game play was attempted, I was pleased to see that my 3 year old could almost hold her own with her older brother.  Though my 5 1/2 year old’s understanding of which pieces weighed more and would throw off the balance more or less was more developed, the game pieces were so easy to grasp that my little one had little problem removing them from the platform.

As a teacher, I was glad to see both kids having to think carefully about which piece to remove at each turn so as not to upset the balance of the game (or when they wanted everything to fall over, which piece would create that desired result!) and also to work on their hand-eye coordinating by grasping the pieces.

Far from being disappointed when someone removed a piece and the game board toppled over, my kids both found it hilarious and immediately worked to re balance the whole shebang so that they could play again. And again. And again.

Chickyboom will definitely have a place in our game repertoire. My kids can’t wait to play it with a larger group of friends!

**Disclaimer: I received a sample of the game to facilitate my honest review. All opinions are my own.**