**Disclaimer: I received a product sample in order to facilitate my honest review.  All opinions are my own.**

Even though, as a girl, I wasn’t the target audience for Transformers, guerrilla cartoon marketing being what it is, I can (but won’t) sing you the first bit of the jingle from the 1980’s Transformers commercial.  Chances are, if you grew up in the same era and ever turned on the television, you can do the same.

These, ladies and gentlemen, are not the Transformers of your youth.

Instead of simply an action figure which can be transformed back and forth from a robot to some sort of vehicle, the ConstructBots (as you might guess from the name) allow you to start from nuts and bolts–choosing each little piece of your soon to be created character.  You can even mix and match between sets of ConstructBots to make even more bizarre robotic creatures. 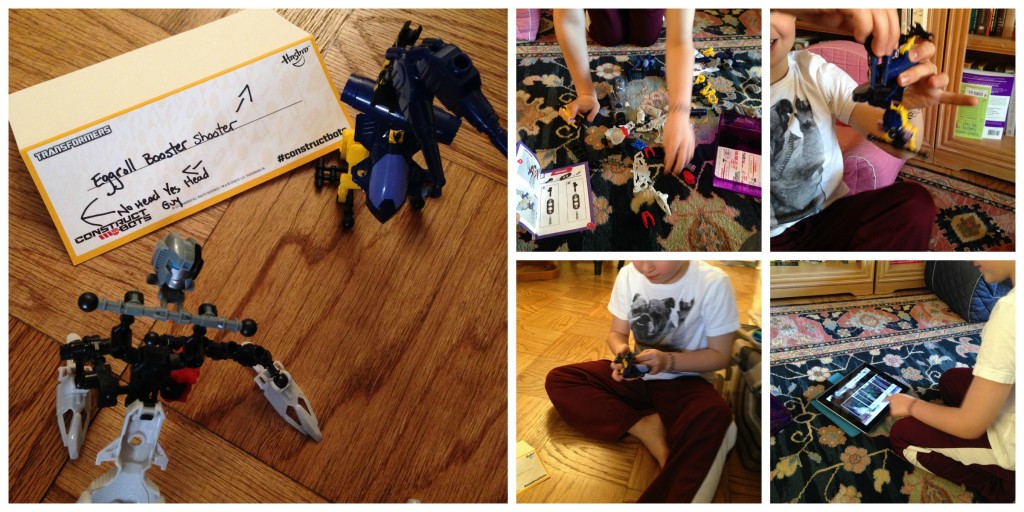 My 7 year old son was first overwhelmed by the task at hand (not being an action figure kind of kid) but became pretty psyched when he saw how he could combine the sets into strange looking bots.  There was definitely a learning curve involved in figuring out exactly where each piece connected and how make our bot transform–but we worked it out when we stopped trying to look at the directions.  My guess is that a kid more familiar with the actual Transformer characters and how they work would have an easier time right off the bat, but my kiddo had fun just the same.

Even more so when he saw that there was a free iPad app on which he could make his creation come alive. (The app is free, but there are scannable codes in each pack which allow the player to accessorize his or her bot.)

From an educational point of view, I could see this product coming in handy as a literacy tool to help a struggling writer name and describe a bot and come up with a back story and continued adventures for the character.  Though you won’t be finding this product on a shelf with literacy toys any time soon, it could definitely be used as an educational tool.

Hasbro has been nice enough to make a ConstructBot available to me to giveaway as well!

For fun, I will be running a flash 24 hour giveaway.